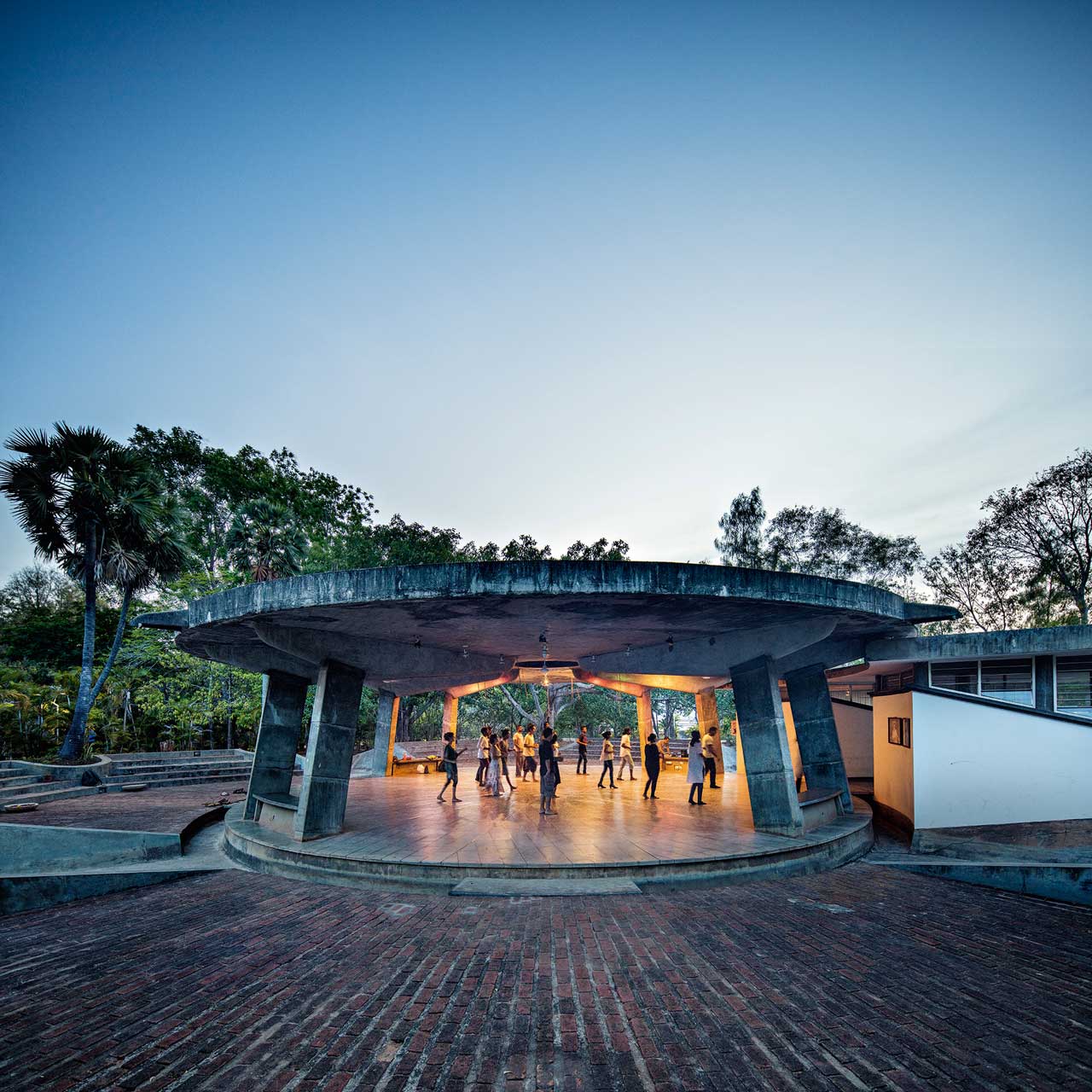 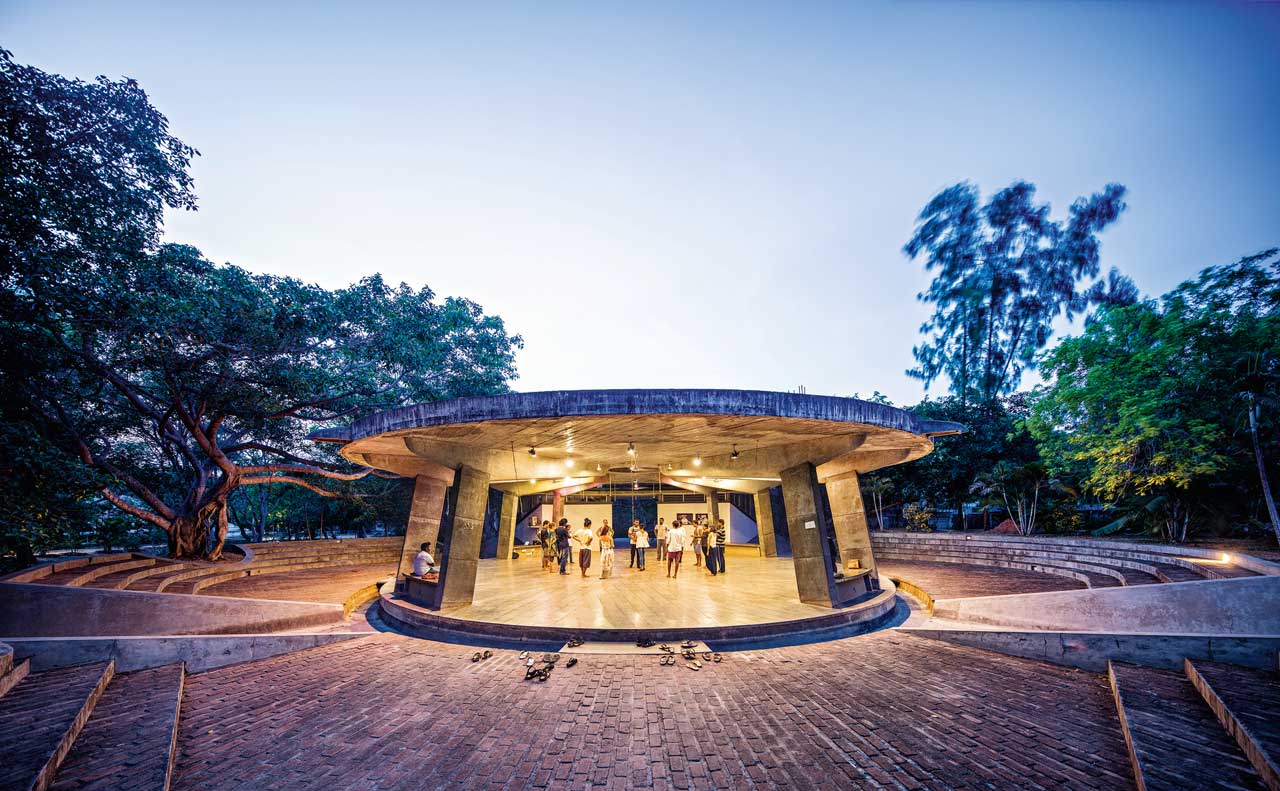 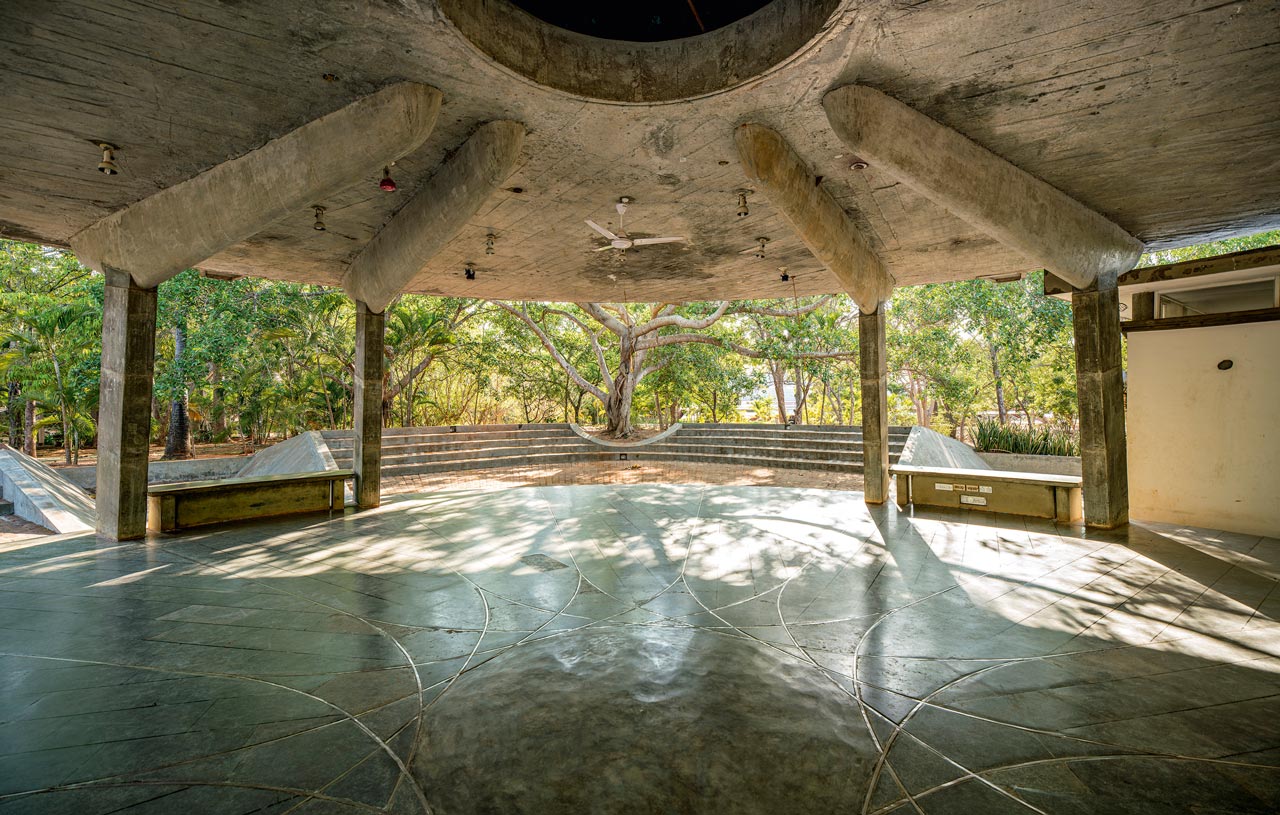 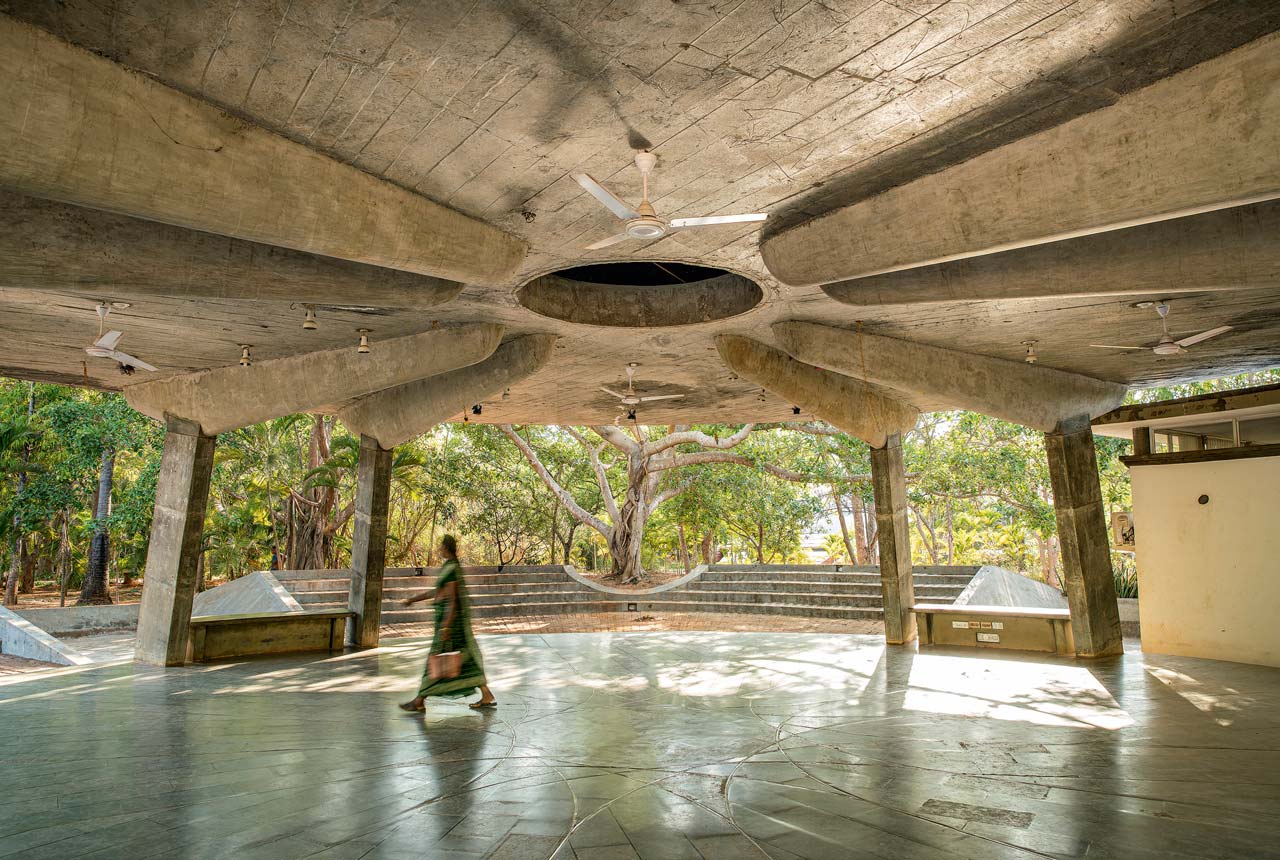 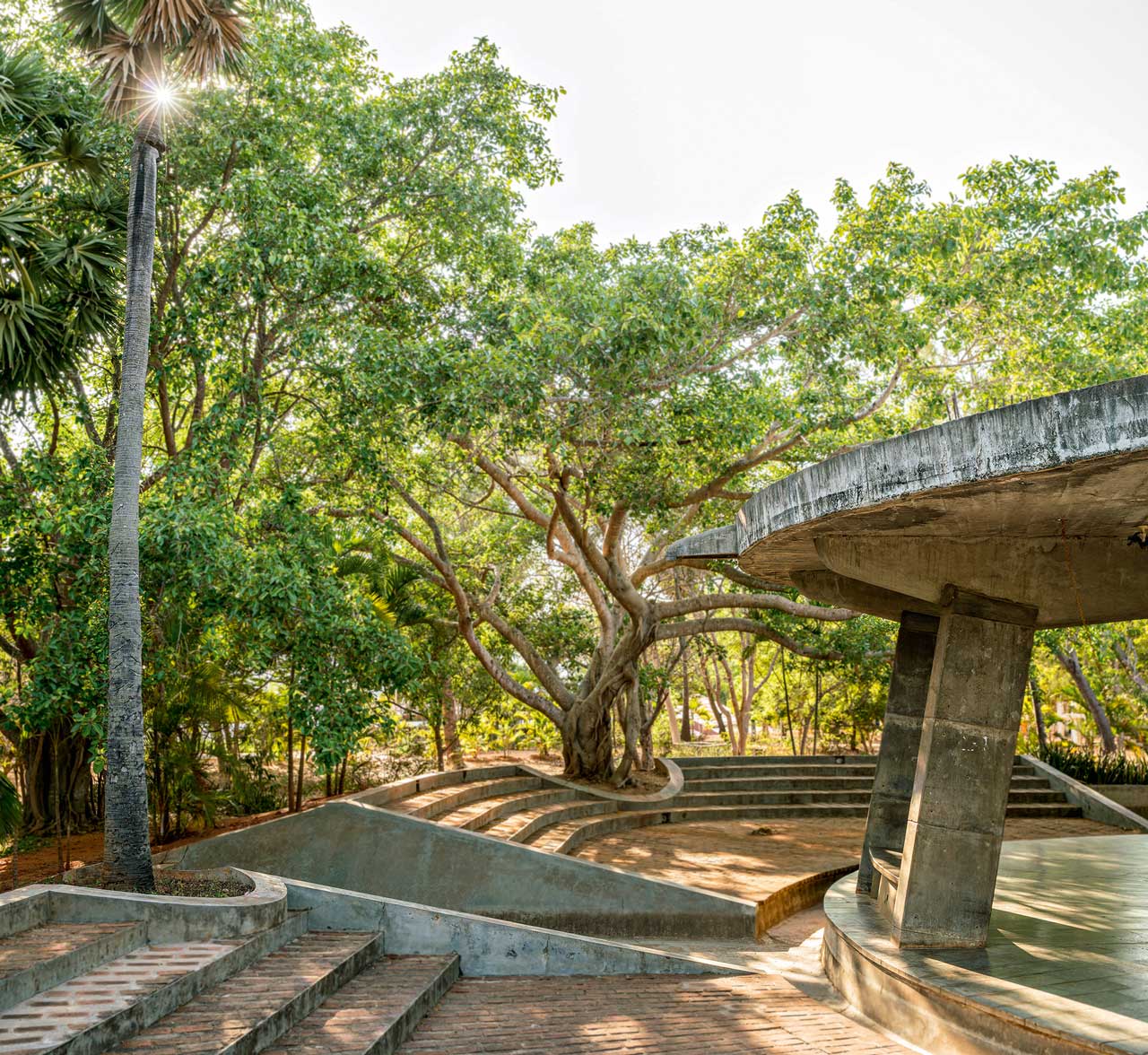 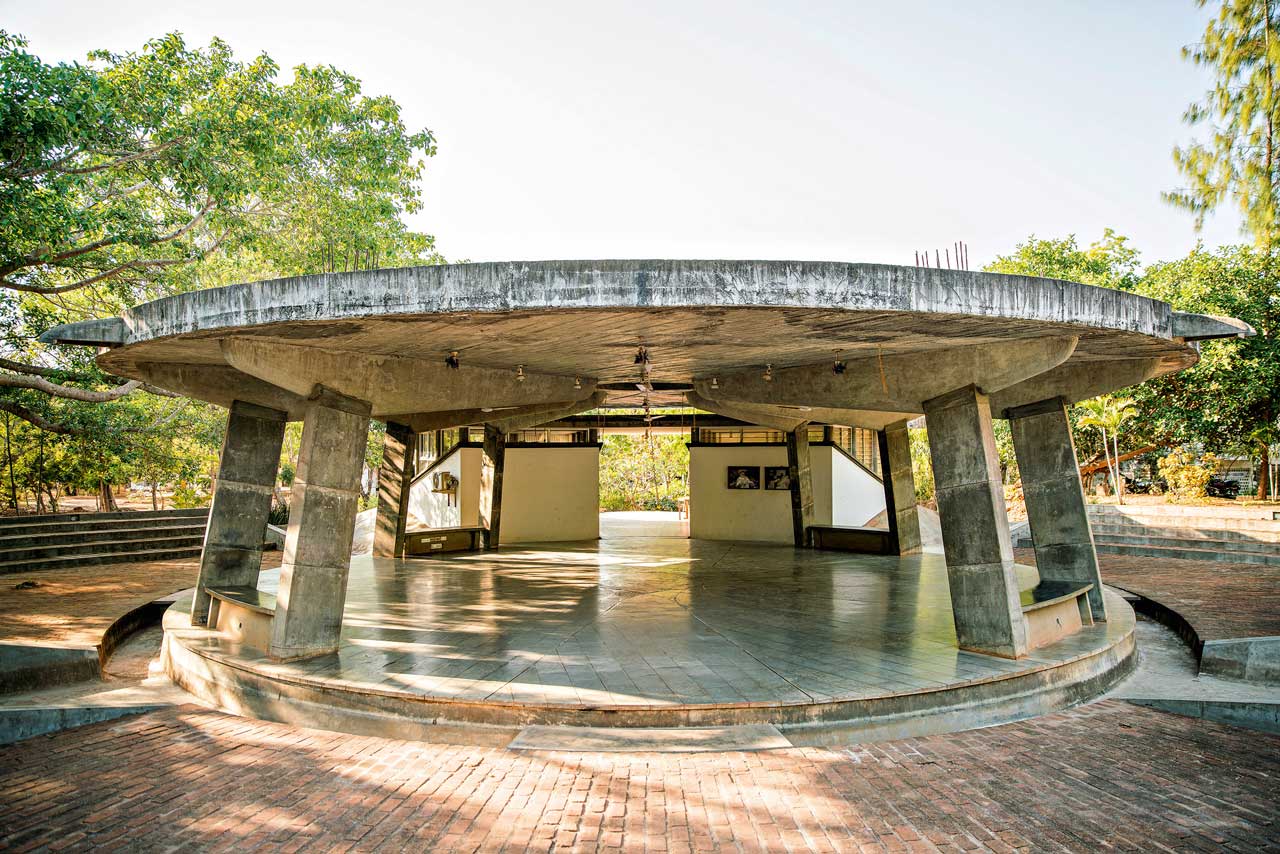 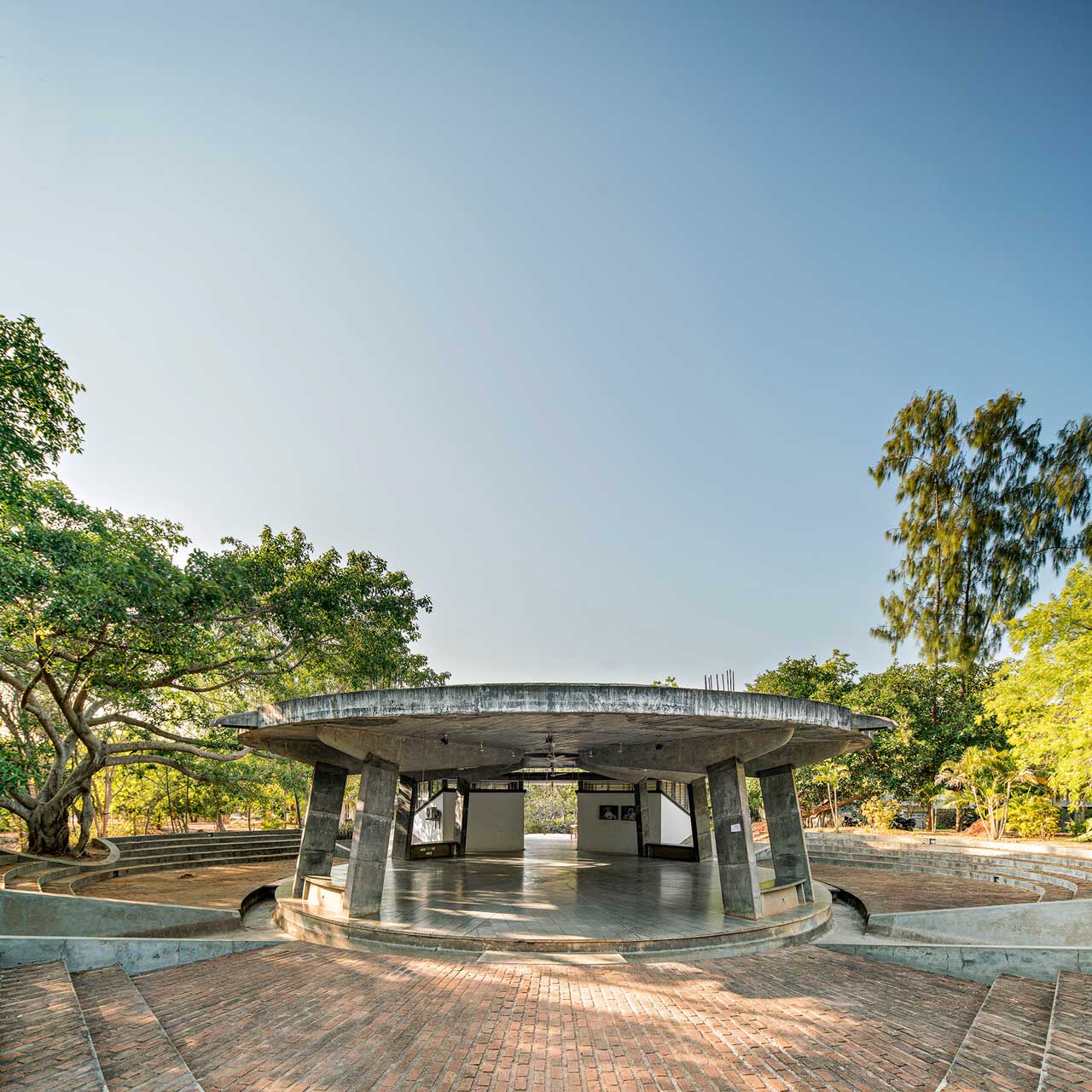 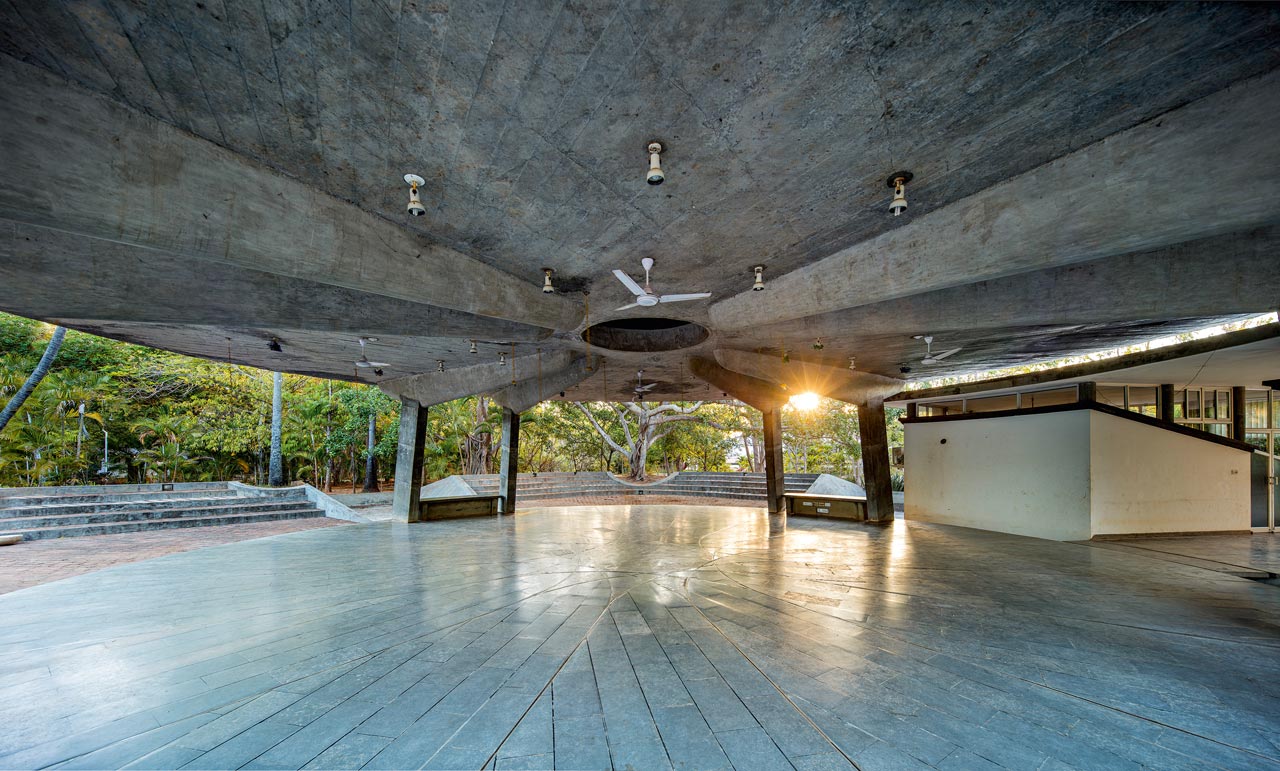 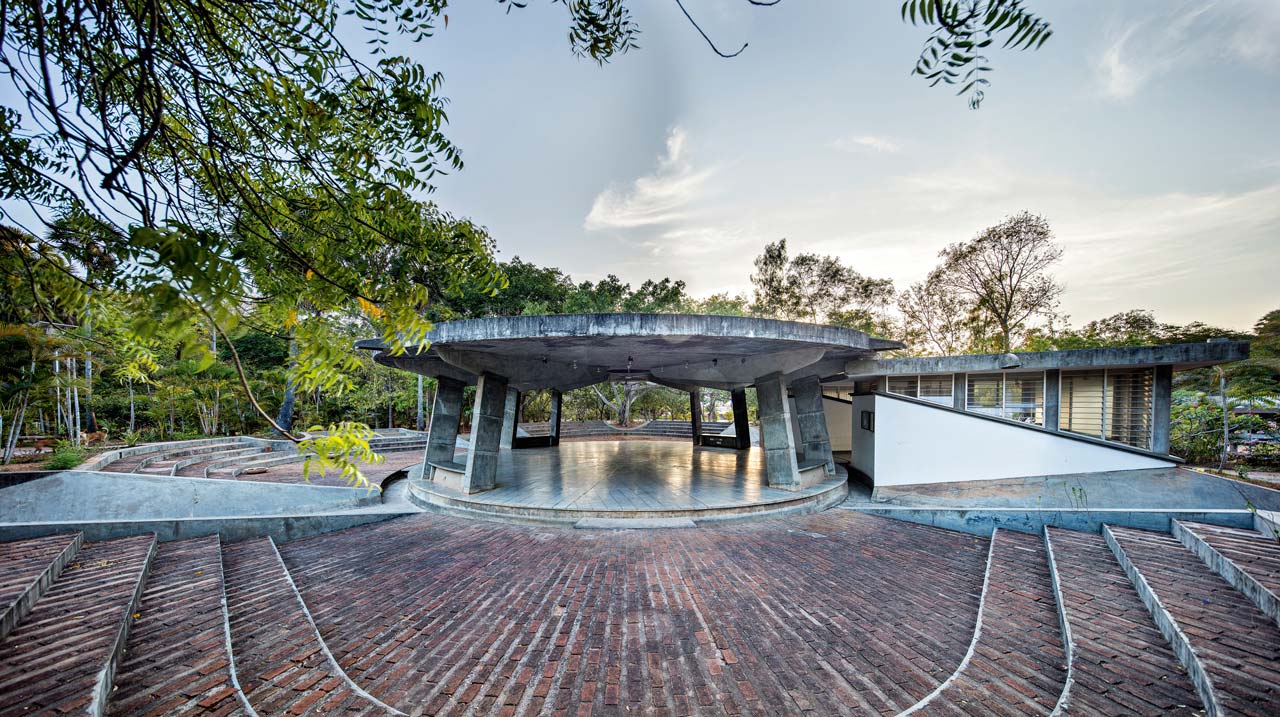 Efficient structural design can lead with substantial savings in steel and cement, the two most commonly used high energy materials. A circular open pavilion of 16 meters diameter is supported by some additional service rooms. After several iterations the concept chosen for execution was the one that used 75 cubic meters of RCC instead of 125 cubic meters amounting to substantial savings. The structural system has a major influence on the architectural form and space.

Inspired by the work of Pier Luigi Nervi this project have involved the further development and use of ferrocement technology to reduce the use of structural steel to chicken mesh compared to conventional higher diameter steel bars. In this case though ferrocement was used as economical moulds, as lost shuttering to enable that radial beams with an efficient curved profile could be cast insitu. Sloping exposed reinforced concrete columns reduce the span of the roof.

A community gathering place, this center consists of a circular hall of 16 meters diameter. At its rear, there are two rooms of 55 sqm each for administration and small conferences respectively. For the rest, there are no walls dividing the inside from the outside. Extending outside, there are tiers of seats, forming a low-rise amphitheater. A glass covered opening in the center in the roof allows daylight to enter at the centre of the space emphasizing the vertical central unifying force. The sunrays strike the lines of inlaid stainless steel that make the pattern on the stone floor.

The circle is chosen to contain the shape of the hall to emphasize unity. Sitting around a circle, everyone is focused on the center where the point of unity lies. The amphitheater steps ripple outwards and tend to change its shape from circle towards a square. The last step is a square with rounded corners to imply that the ripples may extend even beyond the physical centre of unity.

* The structural members, being important elements of the design, contribute to the overall aesthetics of the building. The structure is an interesting combination of bold curves of the roof and floor, which are linked by sharp and angular columns with ‘aerodynamic’ beams. The circular roof slab being a strong element of the building has a very dynamic look, emphasized by its lighting pattern of lights, like an illuminated disc at night. The meeting hall expands on three sides onto open to sky amphitheaters. These are linked to the main structure by concrete bridges on the peripheral water channel. These outside spaces allow the meeting activities to spill over onto the surrounding landscape with earth berms on all the sides acting as transition spaces.
* Water body: water bodies around the hall maintaining the quiet and calm atmosphere of the building. The waterspouts of the roof slab deliver the natural water to the water body on four sides.