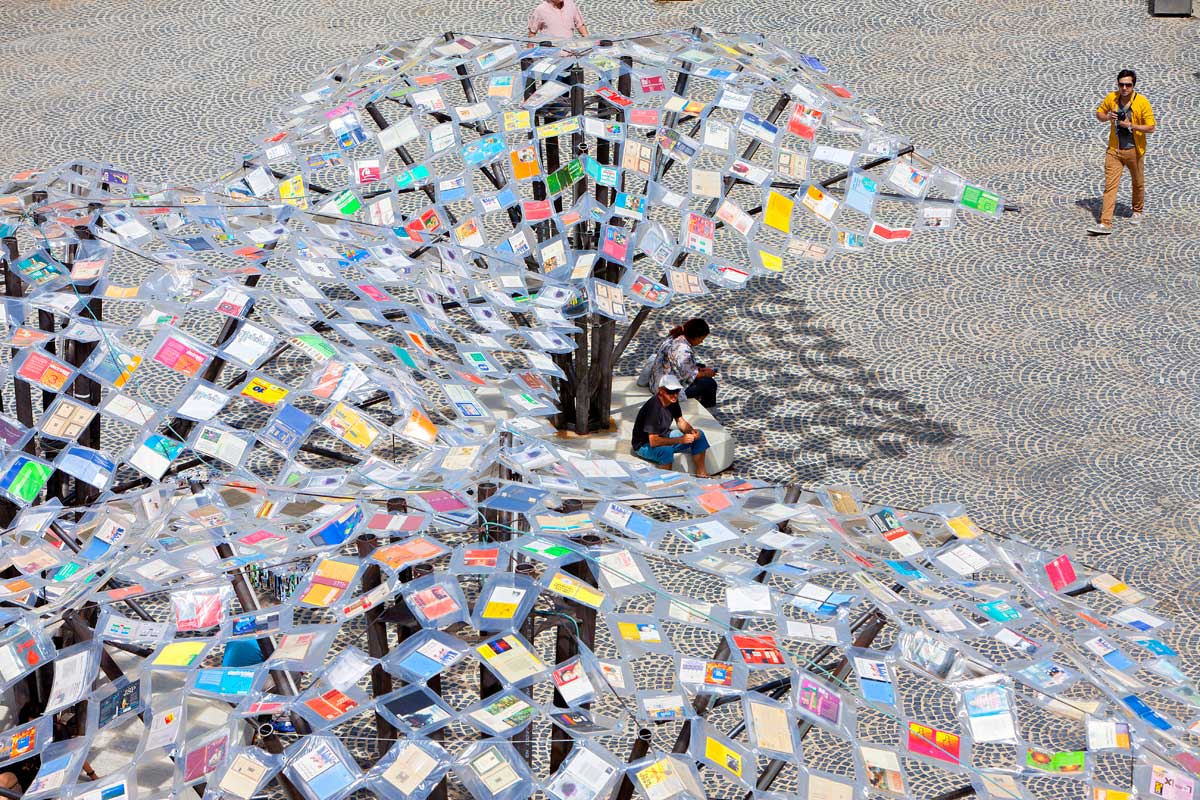 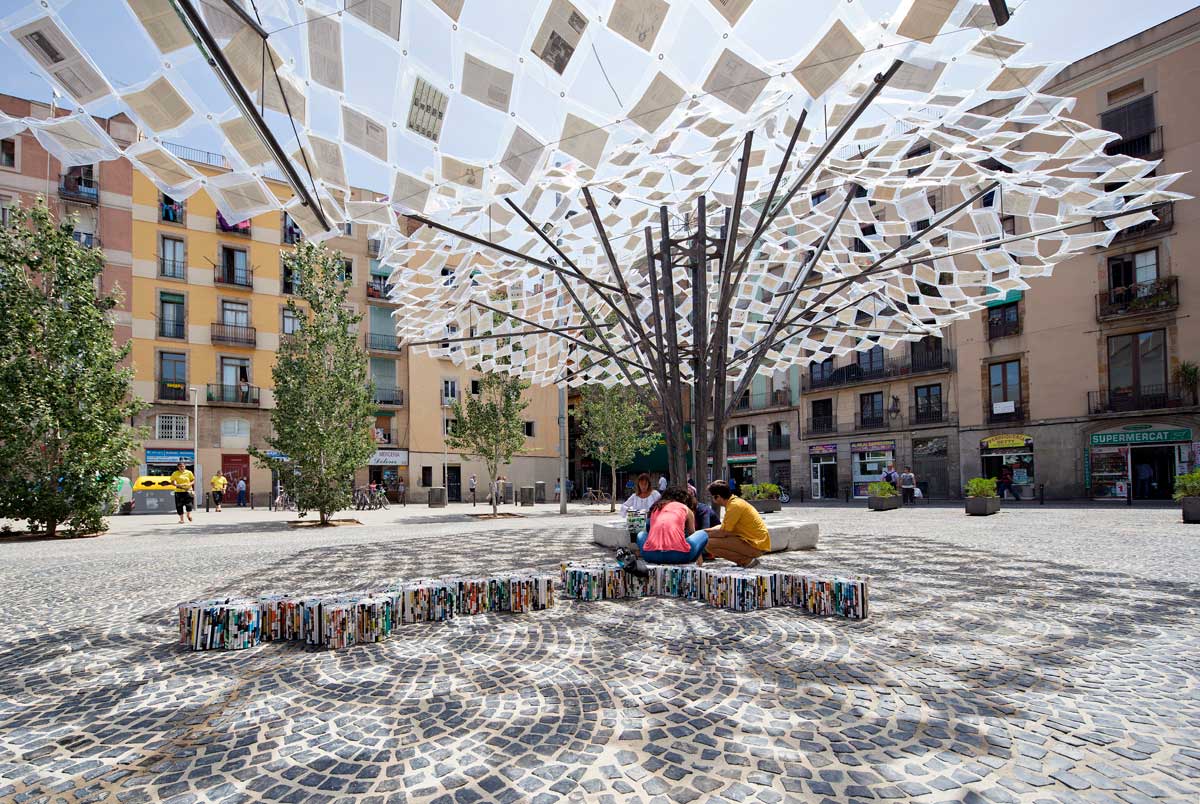 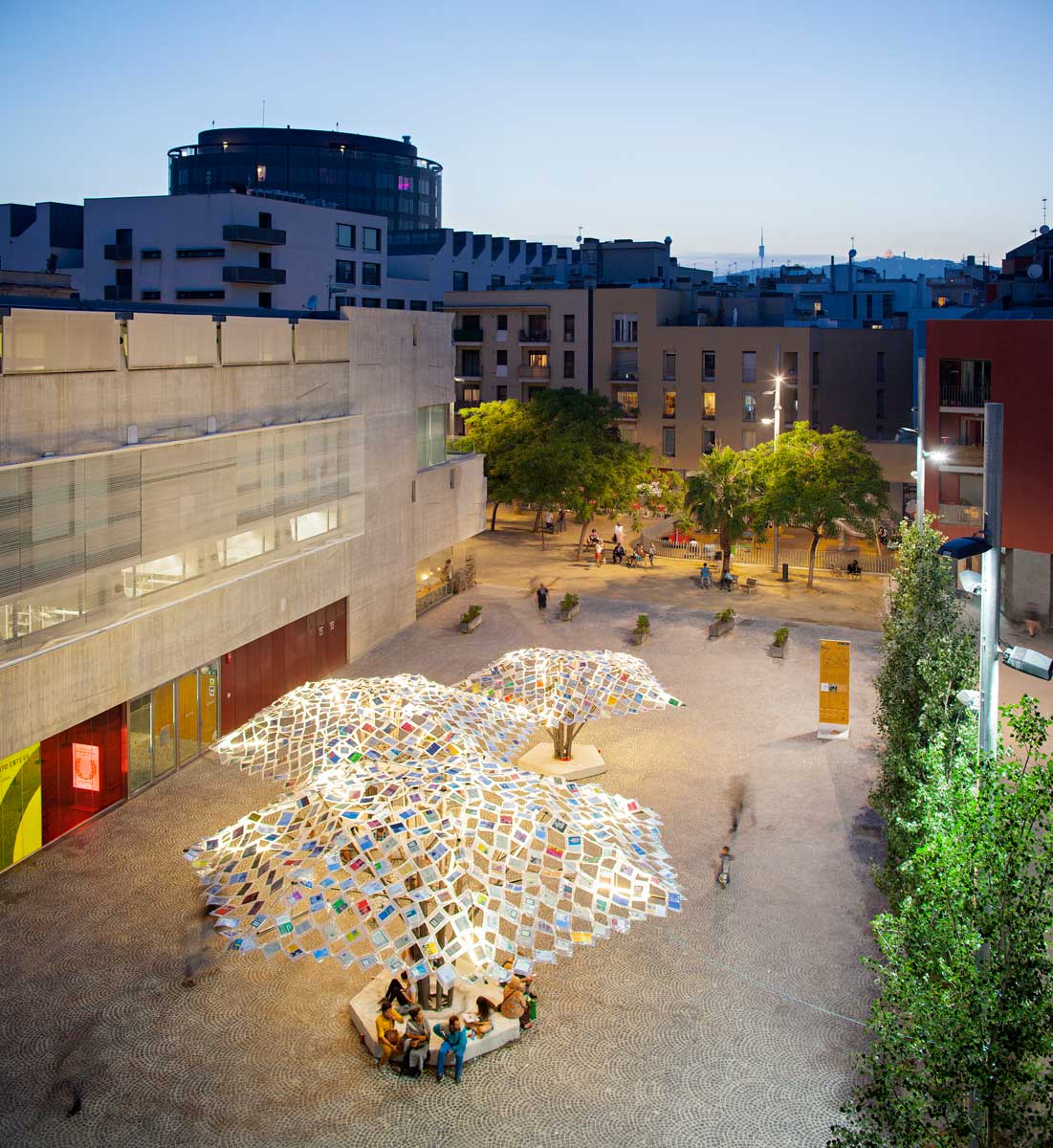 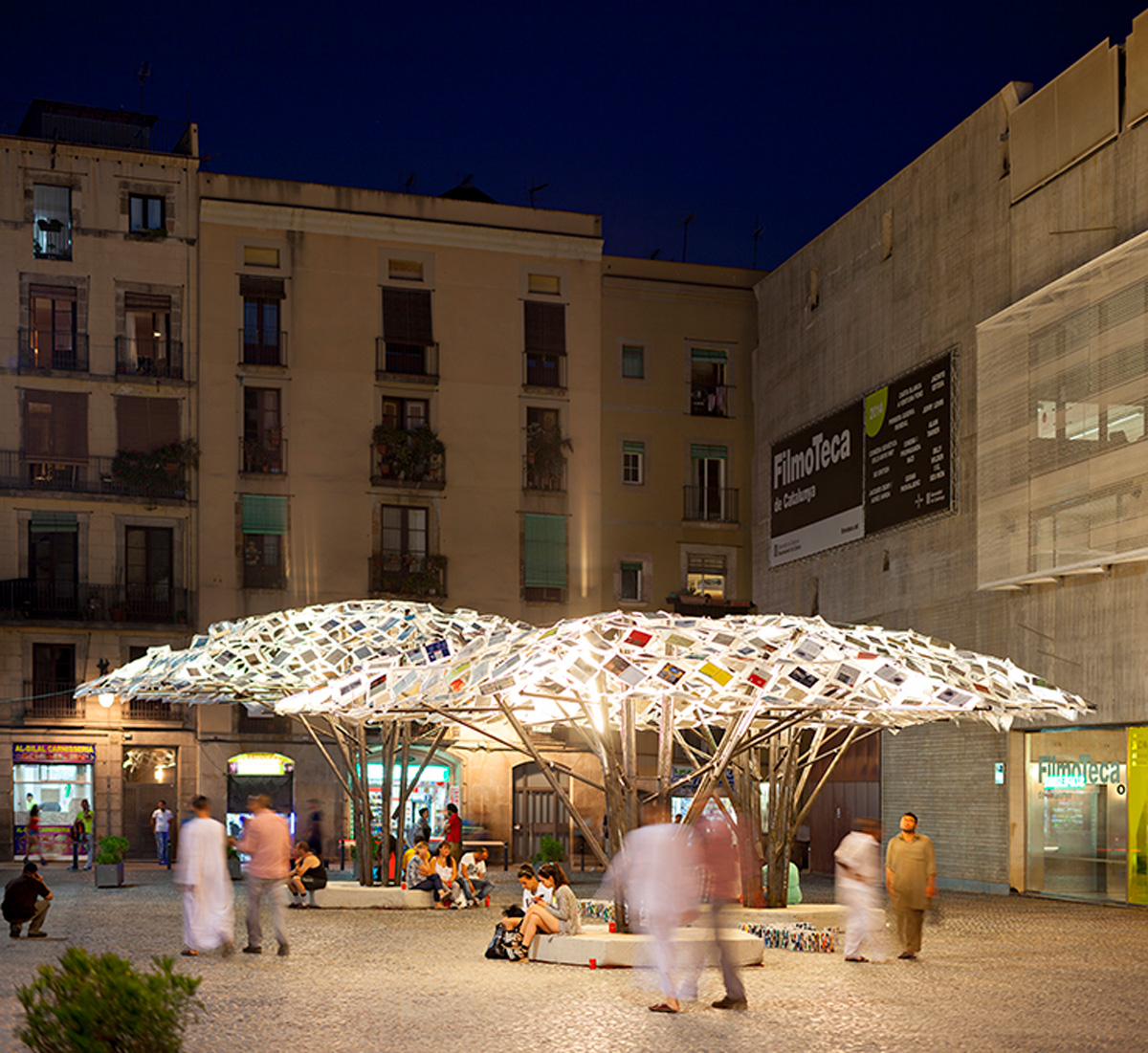 In collaboration with: Institute for Advanced Architecture of Catalonia (IaaC), University of Queensland (UQ) and Technischen Universität Berlin (TU).

‘ The Library of Lost Books’ is a bookless library with a live program of reading. The focus is on the content of the book and the act of reading. ‘Unbound’, a term that relates to the description of books, also expresses liberty and the idea of plenty, of limitlessness.

The theme ‘liberty’ is expressed through creating a place that celebrates ‘reading’, a place that symbolizes an expression of freedom, as a place where knowledge is free. Knowledge is empowerment, and knowledge will lead to progress and freedom. This is appropriately expressed as an ‘outdoor’ place under the ‘shade of trees’ where everybody has a good memory of having read a good book in the sense of freedom, free from the confines of walls of buildings.

Yet, books ‘the building blocks’ of society are facing extinction. Transition/evolution in the ‘form’ of the book through time has led to books becoming lighter, losing their materiality, now often only virtual. However the act of ‘reading’ continues. Books, as beings in transit, pass through the hands of many readers as in libraries, rather than sitting on shelves of owners, or still with publishers. ‘Obsolete’ books locked in storage about to face their end, are rescued from pulping, brought back in circulation, and liberated, and are available for free exchange.

‘ Obsolete’ books will be recycled as a construction material, to build a canopy which will give shade to those who engage in ‘reading’ and ‘listening to stories told aloud’ or those engaged in ‘freely exchanging’ books without exchanging money. After dismantling, the books used to construct the canopy will be available to the public as a souvenir commemorating the event.

Liberation is lightness. These are light-weight structures for heavy-weight books that transcend the sense of ‘weight’ to focus on the perception of the ‘light’ element of the book: content.

Books made of paper are at the environmental cost of trees. Recycled books are used to reconstruct trees as a symbol of the acknowledgement of these resources to create an open-air library for ‘reading’.

Technical DescriptionThree canopy structures of different sizes and of varying heights, called ‘trees’, shade the existing square of Salvador Seguí through central supports like trunks. The technical design is a reflection of the symbolic intention of using knowledge to ‘liberate’ the structure from its weight and express lightness and effortlessness.

This arrangement of interlocking steel tubes achieve a large cantilever with little material. Although the trees have different spans, 10 m, 9 m and 8 m diameter respectively, the same radial assembly is used in each tree composed of the same tubular profiles meeting at exactly the same angles and distances to achieve ease in fabrication through repetition.

Yet the loads in the different trees differ significantly just as the span of the canopy does. While keeping the same profile of the structural component, the proportionate distribution of load is adjusted by reducing the number of radial support assemblies. The largest tree has 7 radials, the medium tree has 6 radials and the small tree has 5 radials. The span of the canopy above remains thus similar and the identical profile assemblies for different tree spans are thus justified.

Heavy concrete bases receive the trunks, that are assemblies of 7, 6 and 5 poles respectively. The different geometries in the 3 trees resulting out of different number of repetitions in each case is indicated through the polygonal design of the bases that are pentagonal, hexagonal and heptagonal. These varying pentagons symbolise the diversity of expressions of an idea resulting from similar units and scales.

The canopy consists of a fabric made of plastic-wrapped book modules that are assembled together and attached to the structure using cable wire. The plastic wrapping is the same as the vaccum packaging of delicatessen items like ham and olives and symbolise the attempt to extend the shelf life of the book and create the association of a highly valued though familiar object.